If you’re having problem with NewSoftSerial versus SoftwareSerial when using 434 MHz (433.92MHz) – receiver, it’s because the receiver cannot pull down the RX pin on your arduino. The library changes the input pin to be pull-up when non-inversion is used.

Change the library in following manner: 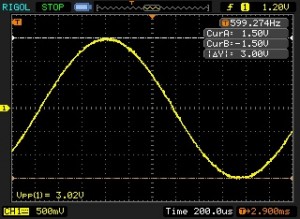 MIDI signal in oscilloscope. Inverted serial 31200 bits per second. Captured from USB->MIDI adapter (SWIS). First bit time is about 32us (31.2us = microsecond ). Voltage difference was 3.92V. 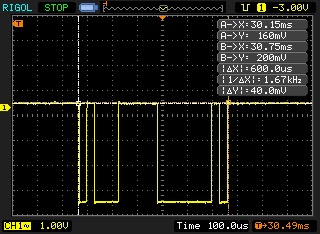 A great page describing MIDI: http://www.tigoe.net/pcomp/code/serial-communication/midi which describes MIDI like:

“MIDI is a serial communications protocol, operating at 31,250 bits per second. Each byte has 8 bits, plus a start bit and a stop bit. It operates at 5 volts DC. The standard MIDI connector is a 5-pin DIN connector, and usually all connectors on the device are female, and both ends of a MIDI cable are male.”